What Not To Do - My Version

I read a What Not To Do list by Melanie Wilson and liked the idea.  So here's my list thus far.

My Life is Good Too!

I have a T-shirt with a cartoon of a man and dog running, with the words "Life is Good!"

I wore it yesterday and Becca, 6, was checking it out.  "What this say Mommy?" she asked me, pointing to the words.  I told her.  And I said "Because life is good and Daddy gave it to me to make me happy."  She laughed, that tickled her funny bone I guess.  She stood up straight, pointed to her chest as if she were wearing the shirt, and says "My life is good too!" with a big grin.  It sure is! 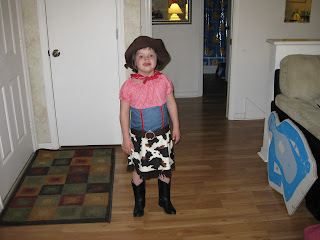 Email ThisBlogThis!Share to TwitterShare to FacebookShare to Pinterest
Labels: Happy

I'm throwing out an old mini diaper bag.  It's one Bill had carried in his car for emergencies.  I found it in the garage from the last time he'd cleaned his Xterra out.  Still packed with size 6 pullups and size 4 clothes for Becca.

The "baby snoopy" theme on the bag brings back memories - of a time of wonder being pregnant with Joey.  After 4 years of infertility, it was amazing to think we were actually going to have a baby.  I liked the baby snoopy items because it was blue for a boy, and because our dog Crocket was a beagle.  It was the first 'theme' I saw and liked and gosh that decision was the easy part :-)

When I was looking at the bag today, and the picture, I thought, was that time real?  After the hard years of infertility, and before the hard realities of real parenthood - Joey's gag reflex and constant throwing up, Down syndrome, hearing loss.
Posted by Oh, and one more thing... at 3:08 PM No comments: Links to this post

ARGH Becca's hair is is is is is such a pain!  She hates having her hair cut.  Last time we took her for a cut the hair dresser she's always gone to had changed salons.  So we went to the new salon.  I told the woman to just trim Becca's bangs, thinking that was enough to attempt on the first visit to the new location.

Well, that left the back 'long' for her and getting longer every day.  And the longer it gets, the more tangles every morning.  After I wrenched my hand a few weeks ago trying to get Becca to stand still and brush her hair at the same time, even the morning hair brushing became a 3 person affair - we go in and wake up Daddy.  He holds her still and I spray on detangle spray and brush as gently as I can.  While she yells and cries and THRASHES back and forth.

I finally couldn't take it anymore, and what would we do when Bill was finally called out on an early assignment and it was just me and Becca?  So anyway took her for a cut today.  And it was awful.  Awful.  And this stupid new place (JC Penney's) is bigger.  And very busy.  With a full house audience for the show.  Not that anyone said anything, but still.

Yelling, screaming, crying, thrashing.  Daddy holding her hands, me holding her face still.  She doesn't cry the whole time.  She and Daddy were giggling and talking nose to nose part of the time.  But even when she's not crying, she's still not really 'still'.  At least her hair is short now.  Very short.  And her bangs are really really short.  I can't blame Andrea the hair dresser, she did the best she could.  But poor Becca is scalped.  Just in time for pictures this week.  ARGH.  argh argh argh.

What have I done wrong??  Becca gets her teeth brushed just fine.  She even lets me floss her teeth!  She drinks her own medicine now!  She lets me put drops in her ears!!  Why can't we get past this hair thing???
Posted by Oh, and one more thing... at 3:00 PM No comments: Links to this post

When Glasses are a Bigger Deal than Down Syndrome

Last Friday Bill and I took Becca for an eye doctor appointment.  This was a long and unpleasant ordeal, but the end of the story is that she has a prescription for glasses.  She is far sighted.

So that night, Joey asks me, in all (whiny) seriousness, "Mom, why do I have to have a geeky sister that has to wear glasses?"  On the inside, I'm ROFL, thinking, um, hello?  Have you noticed the bright green hearing aids in your own ears or the fact that your sister has Down syndrome?

But those things are just normal in his life.  Heaven forbid glasses!  What will people think??

Anyway, I couldn't say that to him.  I just told him matter of factly that Becca needs glasses to see better, that lots of people wear them, and it's not that big a deal.
Posted by Oh, and one more thing... at 10:21 AM No comments: Links to this post 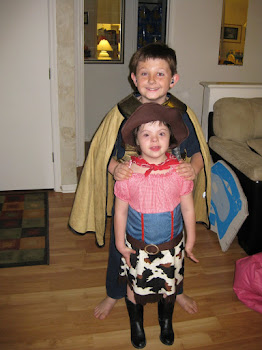 Oh, and one more thing...
Florida, United States
This is a journal of things I want to remember about life & my kids growing up. Because life is complicated, and if I weren't living it, I might not believe it. My daughter is 6 now and has Down syndrome, my son is a 8 and wears hearing aids, my husband is a police detective on loan to a US Marshals warrants taskforce. I work part time for the family business and I am blessed with many loving helpers to provide childcare. Life is good!